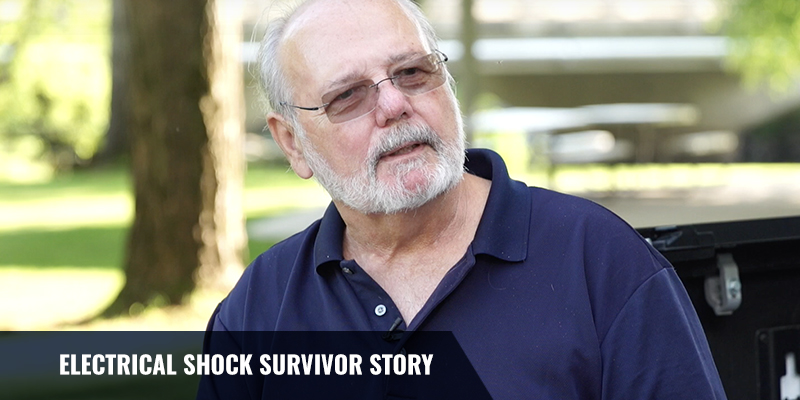 Mark Varnum was an experienced electrical worker who had been in the field since the early 1970s. He’d heard just about everything there was to hear about electrical safety. He played it safe and knew how to prevent accidents in the work place. He’d gone over three decades without an incident.

Then Mark became a victim of electrical shock. We’re grateful he was brave enough to share his survivor story for our EPSCO OneMoment electrical safety series.

Mark was performing a routine task at a facility he was familiar with, doing maintenance and cleaning switch gear in a 13-8 system. It was the weekend of the July 4th and the facility was closed so the crew could work uninterrupted, but they had to move fast because there was a lot to get done and the weather wasn’t cooperating.

Conditions were rainy and there was a constant mist in the air, forcing Mark’s crew to continually assess the risk of electrical shock and whether it was safe do their work or not. Then came a break in the clouds. The crew decided to take action and quickly got to work. Mark made sure to follow all the proper lockout-tagout procedures to secure all the switches, and then got to work on the first one.

But when Mark moved to the second switch, he didn’t realize that someone had come onto the job site and opened up the energized switch.

As he stepped over the open panel to reach inside the box, the electricity jumped from the unit into his body, jolting him with a powerful electrical shock. One hand was grounded on the side of the box, and the charge exited from his other hand. The massive energy blast hurled him outside, throwing him flat on his back. Paralyzed, he could only stare up at the sky. Everything around him looked an eerie green. Mark’s first thought was that he was dead.

A minute later, the pain kicked in. The next thing he remembered was the paramedics cutting off the latex his gloves burned onto his hands. They located his exit wounds, then loaded him into the ambulance. He spent the next month in the hospital.

Mark’s recovery lasted over a year. He needed skin grafts covering his hands all the way up to his wrists, constant dressing changes, and extensive rehab. A decade later, he still only has half the strength he did in his hands. He lost so much dexterity that he can’t even use a keyboard.

Mark brought his story to EPSCO because he wants everyone to understand how important it is to be vigilant when it comes to electrical safety. We’re glad to share Mark’s honest advice in our EPSCO OneMoment online electrical safety training series. As someone who survived an accident he brings a smart and straightforward perspective. Mark will be the first one to tell you that taking a few seconds to double check the switches were safe could have prevented this major accident. As Mark says, “Any project has ten seconds worth of time. But no project has time for an accident.”