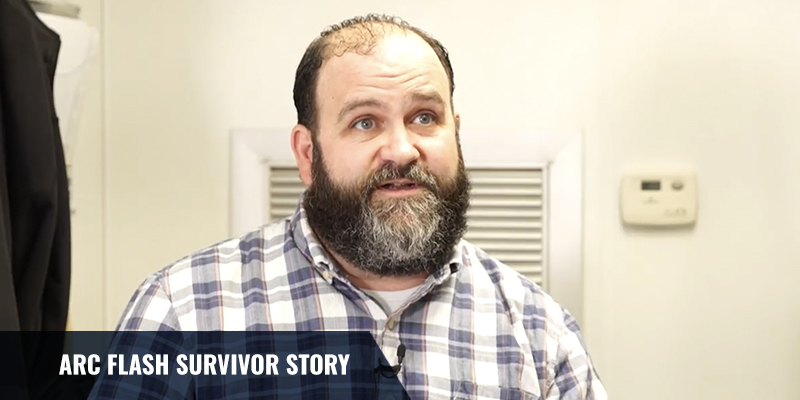 The morning started just like any other for Jason Brozen. He showed up to work, got his assignment, and arrived at the job site thinking he’d get it done, punch out, and be back home with his family for dinner.

Jason had been a master electrician for over a decade and was fascinated with electricity for a long time before that. As a kid, he would ask for electronic toys for holidays and birthdays, just so he could take them apart.

He’d never had a major accident at work, so there was no reason for him to question his approach. This was a straightforward job installing a breaker he’d done hundreds of times before – and he’d gotten them all done without cutting power or wearing any PPE.

All Jason had to do was remove the breaker from the box, inspect it, fit the new breaker and bolt it in. But there were loose parts on the bus bar. As he tried to fit the breaker, the bars got too close and triggered a massive arc flash explosion.

Everything fell into slow-motion. Jason could feel the cycles of electricity ripping through his body. The arc flash was over in an instant but blasted him with more firepower than the surface of the sun.

The next thing Jason knew, he was on the floor in a pitch black room, choking on the smoke with the fire alarm blaring. He didn’t know if he was on fire, but realized he was severely burned as firefighters arrived on scene.

He knew right away he’d been involved in an arc flash incident, but he didn’t realize what it meant to be an arc flash survivor.

He was one of the lucky ones. With only 14% burns he had a better chance for survival than most arc flash victims. But he never realized it would mean two weeks in an induced coma in the ICU and seven months of rehab before he could even think about returning to work.

Third degree burns destroyed everything down through his nerves, requiring skin grafts on his face and hands. Breathing in the hot gas left him coughing up soot from his lungs for weeks.

In the hospital, Jason was immobile and had to rely on the nurses and staff for the simplest things. When he got released Jason couldn’t use his hands for anything. He couldn’t drive. Couldn’t get dressed on his own. Couldn’t even hold his own fork at dinner.

But the thing that caused Jason the most pain, was that he wasn’t able to provide for his family.

It was a long and tough road for Jason to get back onto the field, but he did it. And now, he wants to share his story so that others won’t make the same mistake he did.

Jason was brave and generous enough to share his experience with EPSCO as part of our ONE MOMENT online electrical safety training series. We went in depth to create the most comprehensive arc flash survivor story out there. We had access to never before seen footage taken moments after Jason’s arc flash accident. But we want everyone to understand the damage goes far beyond the physical injuries – It effects your psychology, your family, your company and co-workers, and their clients too.

View the video and see how arc flash changed Jason’s life forever. See how being an arc flash survivor taught him to — “Plan your work. Work your plan. Follow through with that plan. And do not make exceptions on anything when it comes to safety.”